Hoan Kiem Lake (called Lake of the Restored Sword) is now located inside a complex of Ngoc Son Temple, The Huc Bridge, and Pen Tower in the surroundings, making a sparkling colorful natural picture! Ngoc Son has undergone a lot of renovations, one among which was the addition of Thap But (translated as Pen Tower) on its hill, which was once called Dao Tai. Three words were inscribed on the tower: “Ta Thien Thanh” or “write on blue sky”. Inside the gate a pool resembling the shape of an ink well was added. Beyond the ink well is The Huc Bridge, which means “where the sun light is absorbed”. The bridge leads to Dac Nguyet Lau (or “Moon Light tower”) – Ngoc Son shrine. Beyond the gates to the shrine, there are two walls called Bang Rong and Bang Ho (dragon and tiger slate), where the names of those who passed the national test were inscribed. 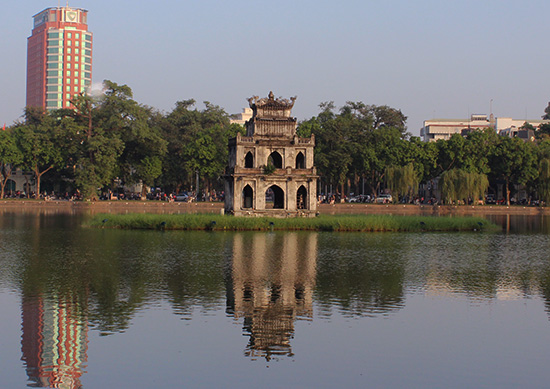 The name of Hoan Kiem Lake is derived from a legendary story in King Le Dynasty about six centuries ago. The legend has it that during the war against the Minh aggressors, King Le Thai To was given a precious fairy Sword by the Golden Turtle God. After 10 years of continuous struggling, the King finally defeated the Chinese and reclaimed the nation’s independence. After that, on a nice day, while boating on Lake Luc Thuy, a large turtle came towards him. It immediately grabbed the sword with its mouth and submerged. The king mourned the lost of such a valuable sword, yet could not find either the turtle or the sword. He realized that the God must have lent him the sword to drive back the enemy, but then that his nation was dependent, the magic sword must be returned. Thus, King Le Thai To re-named the lake Hoan Kiem Lake or Lake of the Restored Sword. 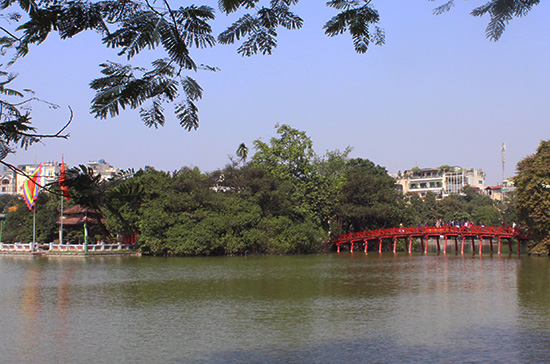 Since the reign of King Le Trung Hung (XVI century), every King in the Le dynasty, and Lord Trinh made great contribution the beauty of the lake. Lord Trinh Giang built Khanh Thuy shrine on Ngoc Island on the north end of the lake. He also had the two man made hills built across from Ngoc son Shrine. At the end of the Le Dynasty, Khanh Thuy was toppled by Chieu Thong. A philanthropist named Tin Trai built Ngoc Son pagoda, which was renamed into Ngoc Son shrine during the reign of Thieu Tri III (1843) as it was no longer a Buddhist shrine. Instead, it became a shrine of Van Xuong, a deity, in charge of literature and the various tests required to become a Mandarin. It has also been a shrine of General Tran Hung Dao, a National Hero who secured numerous victories against the Mongols.
In the middle of Hoan Kiem Lake lies a Turtle Tower, which reminds Vietnamese people of great assistance of the Turtle God. King Le Thanh Tong was said to be used to fish here. Lord Trinh also built the structure to house his entourage while visiting the lake.

Despite the time’s ashes and dust, the name of a popular historical and legendary beauty-spot Hoan Kiem Lake is eternal for good as an evidence of a fairy and heroic Hanoi during the past wars, and a romantic and charming Hanoi today!