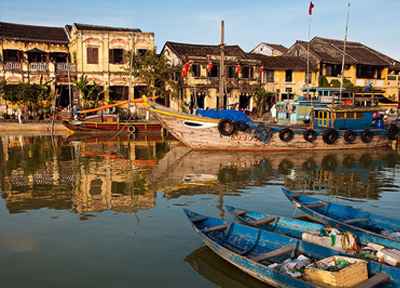 Hoi An Town is an exceptionally well-preserved example of a Southeast Asian trading port dating from the 15th to the 19th century. Hoi An is an old town down the Thu Bon River, on the coastal plain of Quang Nam Province, about 30 km south of Da Nang City. Hoi An used to be known on the international market with many different names such as Lam Ap, Faifo, Hoai Pho and Hoi An.

What is so special about Hoi An is that this little port town is in an incredible state of preservation. It offers some of the most densely-concentrated sights in Vietnam with its old streets bordered with ancient houses and assembly halls, its pagodas, temples, ancient wells and tombs. In total, more than a thousand places of interest. The architecture of Hoi An is characterised by a harmonious blend of Vietnamese, Chinese and Japanese influences. After many centuries, Hoi An is still respectful of its traditions, folk festivals, beliefs and of its sophisticated culinary art. Set in a quiet environment, Hoi An is surrounded by peaceful villages that have crafts such as carpentry, bronze making, ceramic…

Researchers said most of the buildings in Hoi An underwent restoration at the beginning of the 19th century, even if they might be constructed long time ago. The ancient architecture shown most clearly in the Ancient Town that located in Minh An Ward. It covers about 2 square kilometres and almost of all famous relics in Hoi An are gathered here. The streets are very short and narrow, having a winding, crossing as the chessboard style. The topography of the ancient town tilt gradually from north to south. The buildings in the old town is built mostly with traditional materials such as: brick, wood and no more than two floors. The traces of time is able to find not only on the architectural design of each building but also everywhere like: on the yin-yang roof tiles covered with moss and plants; the old gray mold walls; the pictures carved on a strange animal, or describing a old story… Having inherited a multi-cultural architecture so varied and sophisticated, Hoi An must have attracted numerous and talented workers in carpentry, ceramics, and woodcarving from China, Japan and other regions of Vietnam.

For centuries, Hoi An had developed into a melting pot of various nationalities who came to the area, bringing along their own cultures. Accordingly, Hoi An features the co-existence of indigenous customs and habits and those imported by foreign settlers. 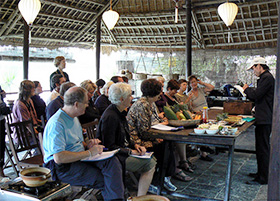 Hoi An Cooking Class Tour – Half Day | From Contact us

Situated on the banks of the Hoi An River, the Red Bridge Restaurant & Cooking School is designed to meet the growing demand from local and international travellers, for...