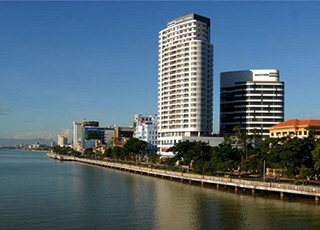 Danang City is located in middle of Central Vietnam, between Hanoi and Ho Chi Minh City, separated from Laos by the western Truong Son Mountains. It is surrounded by Thua Thien-Hue province along the northern border and Quang Nam province on the southern border. It is embraced by the East Sea with 150km of seacoast.

Previously occupied by both the French and the Americans, Da Nang marks the halfway point between the capital in the north, Hanoi, and Ho Chi Minh City in the south. It’s the fourth largest city in Vietnam. Apart from some shopping highlights and historical sights, the main reason for most travellers staying here is its proximity to the well-known My Khe Beach, Lang Co Beach, Hoi An and My Son.

Danang is an ancient land, closely related with the Sa Huynh cultural traditions. Many imposing, palaces, towers, temples, citadels and ramparts, the vestiges from 1st to 13th are still to be seen in Cham Museum

Danang has other various interesting attractions as Ba Na Hills, Ngu Hanh Son (Marble Mountains) as well as the Linh Ung Pagoda, Han River, and My An, Non Nuoc beaches, stretching on dozens of kilometers…