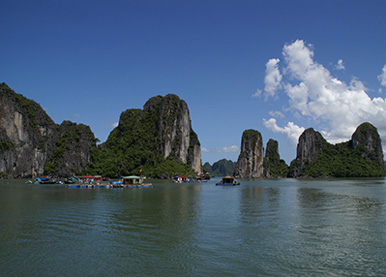 Halong Bay is a beautiful natural wonder in northern Vietnam near the Chinese border. The Bay is dotted with 1,600 limestone islands and islets and covers an area of over 1,500 sqkm. This extraordinary area was declared a UNESCO World Heritage Site in 1994. There are two kinds, limestone and schist, which are concentrated in two main zones: the south-east (belonging to Bai Tu Long Bay) and the south-west (belonging to Halong Bay). The average geological age of the islands is between 250 and 280 million years old.

Halong Bay has been called by the great national poet Nguyen Trai: “a marvel of the earth erected towards the high skies”. While exploring the bay, tourists will feel lost in a legendary world of stone islands which shapes change depending on the angle and the light. There are many names given to islands according to their shapes and forms such as Hon Dau Nguoi (Human Head Islet), Hon Rong (Dragon Islet), Hon Canh Buom (Sail Islet), Hon Trong Mai (Cock and Hen Islet)… But the beauty of Halong Bay does not consist only in the forms of its mountains, islands and the colour of its waters, but also in its infinitely rich system of grottoes and caves such as: Thien Cung (Heavenly Palace Grotto), Dau Go (Driftwood Grotto), Sung Sot (Surprise Grotto), Tam Cung (Three Palace Grotto), Trinh Nu (Virgin Grotto)…. Each is a grandiose and refined natural architectural creation. 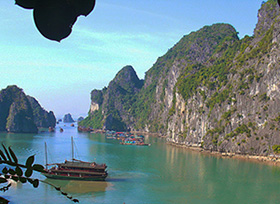 Halong Bay Day Trip – One Day | From Contact us

Halong Bay, located in the Gulf of Tonkin, covers an area of 1500 square km. With more than a thousand limestone peaks soaring from its crystalline emerald water this...