Thien Mu Pagoda (namely Heaven Fairy Lady Pagoda), also known as Linh Mu Pagoda, is one of the most fascinating and ancient pagoda in Hue city. It is situated on Ha Khe hill, on the north bank of the Perfume River, in Huong Long village, 5 kilometers from Hue city, which is easy to reach from the city center. According to legend, the people around this area used to see a vision of an old lady appearing on the hill where the pagoda now sits. Upon seeing people, she always said that someday a great leader would build a pagoda at this site to bring peace to the country. One day, when Lord Nguyen Hoang passed by this area, upon hearing the story, he ordered the construction of the pagoda in 1601. He named it Chua Thien Mu – Heavenly Lady Pagoda.

The beautiful pagoda was built in 1601. Later on, several kings of the Nguyen Dynasty such as Gia Long, Minh Mang, Thieu Tri and Thanh Thai, all had the pagoda restored. At this very initial time, Hoang was the governor of the province of Thuan Hoa (now known as Hue), yet, started ruling his independent state in central Vietnam. According to the royal annals, Hoang was on a sightseeing trip and holiday to contemplate the seas and mountains of the local area when he passed by the hill, which is now the site of the Thien Mu Pagoda. On hearing the mentioned local legend, he had the pagoda constructed. The initial temple was in a very simple form of construction, but as time went by, it has been redeveloped and expanded with more intricate features.

Located on the bank of the poetic Perfume River together with its typical traditional architecture of Hue pagodas, Thien Mu Pagoda has become one of the most popular tourist attractions in Hue City. It is recommended that visitors going on a city tour around Hue visiting this pagoda in the afternoon so they can observe the monks’ praying time inside the pagoda as well as enjoy the beautiful sunset on the Perfume River. For day tour or half a day tour in Hue city including this attraction, tourists might check out this itinerary for half a day Thien Mu Pagoda tour or this one day tour for a classic Hue city tour. 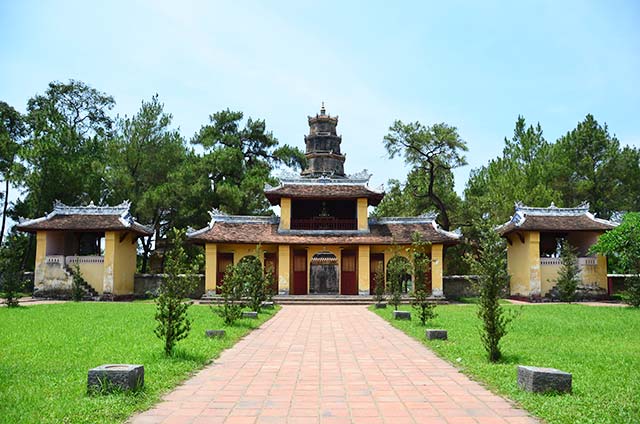 Overlooking the southwest bank of the Perfume River, the Pagoda has two sections. The front of the Pagoda can be accessed from the Perfume River and has the Phuoc Duyen tower which can be seen from many points in Hue. This area also houses the great bell which was cast in 1710. It also has the turtoise bearing a great stele carved in 1715.

The rear of the pagoda is the main hall where Buddha is enshrined. It is also an area where the monks of the temple live and practice Buddhism. The Pagoda was the center of Buddhism in central Vietnam. In 1963, in a defying act against the Diem regime, Thich Quang Duc burned himself in downtown Saigon. Today, the car that took him to Saigon is stored in the rear of Thien Mu Pagoda.