The name “Thu le” means “giu le” (taken from Chinese), (literally keeping politeness and rites), which shows that the villagers attach much importance to maintaining their rites, customs and disciplines. Located in Quang Phuoc Commune, Quang Dien District, Thua Thien Hue province, the ancient village of Thu Le has preserved many cultural features of a village in the old capital of Hue for more than half of a century.

There are 14 families in the village, including eight large families, namely Le, Nguyen, Ho Dang, Phan Gia, Phan Ngoc, Phan Nhu, Ngo Van and Ngo Thoi. According to the village’s custom, each large family together with the authorities and villagers, take responsibility for organizing worshipping rites during the year. Many family worshipping houses are scattered along the village’s main road. Each is not only a beautiful architectural work but they also preserve the cultural and historical imprints of a family. 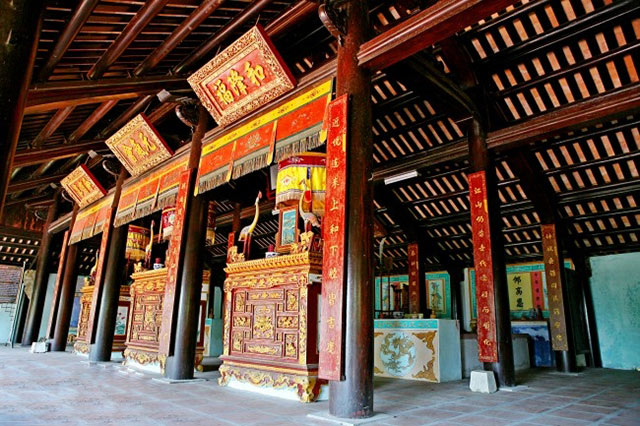 The village also boasts an ancient pagoda with a grand three-gate entrance. The main hall was built in the style of a long Ruong house, a strange architecture rarely seen in Hue. The roof of the pagoda was terracotta inlayed with different shapes of dragons, unicorns, tortoises and phoenixes. All the parts made from wood in the pagoda were carved with delicate patterns, showing the skillfulness and talent of artisans in My Xuyen Village in the past. On the main four doors, artisans created four-season paintings and eight beautiful objects with five bats holding in their mouths the Chinese script “Tho”, symbolizing five good fortunes. For a long time, Thu Le Village’s pagoda has been the place for organizing religious activities and is a charming destination for tourists nationwide.

About 400m from Thu Le Pagoda, the village’s communal house was built according to the rules of fengshui. It is an architectural relic in the suburbs of Hue with the style, scale and decoration imbued with that of the Nguyen Dynasty in the 19th century. The wood structure in the communal house was also delicately carved. Furthermore, the communal house also has preserved many precious ancient objects like stone steles, stone bells, a block of marbles used to exorcise the plagues and a set of 57 ordinances conferred by kings in the Nguyen Dynasty.