More than 500 years of existence, through the wars and the destruction of nature, Phuoc Tich village still preserves the pristine beauty of a traditional Vietnamese village. The village is some 40km north of Hue City. Phuoc Tich was established in 1470 under King Le Thanh Tong. The village is located in the bend of the O Lau River, making the village resemble an island. The village has 12 river wharves symbolising the 12 animals of the lunar zodiac.

Phuoc Tich Ancient Village, in the former capital Hue, is an epitome of Vietnam’s peaceful countryside, and famous for the ancient architecture and design of its many old houses and temples. Built in 1470 under the reign of King Le Thanh Tong, the village was recognized as a national relic by the Ministry of Culture, Sports and Tourism in 2009.

Phuoc Tich Village spreads along the poetic O Lau River at the border of Thua Thien-Hue and Quang Tri provinces. It has all the features of a typical Vietnamese traditional village. There are river wharfs, temple yards, old pagodas and paths winding among endless tea trees in the village. Temple and domestic structures are dappled with moss. The first stop for tourists may be Cay Thi Temple, which is about 700 years old. The temple retains harmonizing aspects of Vietnamese and Cham architecture, with linga and yoni relics.

Of the village’s 117 houses, 37 are between 100 and 200 years old. They are so well preserved as to astonish cultural anthropologists, architects and historians. Phuoc Tich houses are mainly made of jackfruit wood and are adorned with exquisite and lively carvings, most of which remain undamaged despite having gone through so many wars throughout the years. The interiors usually include parallel sentences, a horizontal lacquered board, wooden scrolls, a plank bed and a wardrobe altar. 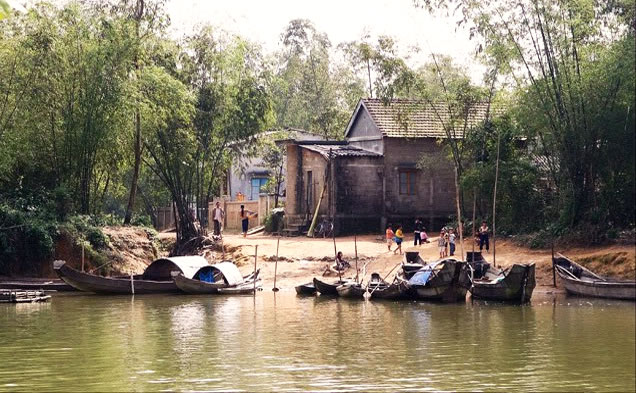 The mossy, tile roofs of the houses sag slightly.  Brick walkways, wind screens and old water wells complete the picture. Lines of Chinese tea trees are often charming substitutes for walls. An alluvial channel winding along the O Lau River, called Ha Cat, is thought to be the place where human souls settle after death. The other side of the river is deemed to be the place for living local people.

The village is also associated with Hue’s royal music (nha nhac), which has been recognized as part of the world’s intangible cultural heritage by UNESCO. Phuoc Tich was recognised as a national relic in 2009 by the Ministry of Culture, Sports and Tourism, following Duong Lam