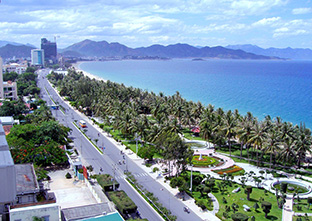 Nha Thrang is located about 450km northeast of Ho Chi Minh City in the south of Vietnam. It has an airport with daily flights from all major cities, and it’s also easy to travel here by either bus or train from Ho Chi Minh City. From the north, it is also possible to catch a bus or train from Da Nang. With its status as Vietnam’s most popular seaside retreat, comes a big choice of hotels – something for everyone.

To the north of Nha Trang stands the Chong mount which looks like a wide open hand over the sea. Far offshore, the Yen (Swallow) Island appears with lush green colours where salangane nests have been harvested for years to make the traditional “bird’s nest” tonic and food.

The 7km white sand beach of Nha Trang is often called Vietnam’s Mediterranean Area, considered one of the jewel along Vietnam’s long stretching coast line. Nha Trang is sunny all year round, with an average temperature of 23?C due to northern winds.

The rainfall is less than anywhere else in the country and the area is not threatened by storms since it is protected by the Truong Son Mountains and Ca Pass. From Ca Pass, one can see Ro Bay (Vung Ro), Hon Do…

Hon Tre Island is 36km? and belongs to a group of islands located southwest of Nha Trang. It takes two hours to reach Hon Tre Island by rowboat and only 20 minutes by ferry.

Nha Trang benefits from topographical advantages of the sea, islands, mountains, and deltas. West of Nha Trang, there are endless mountain ranges where a wide variety of animals and birds live.

Nha Trang has many specialties. Especially, bird’s nest soup, or swallow’s nest soup is very famous in Nha Trang and round Vietnam. The magnificent coral seabed in Nha Trang makes it ideal for scubadiving and snorkeling.

Nha Trang Bay is recognised as one of 29 most beautiful bays in the world.