Hoa Lu, the first imperial capital of Vietnam. The very first meaningful stop-over in Ninh Binh should be Hoa Lu, the capital of Vietnam from 968 until 1010. Before the year 968, the nation was just a district of China. As time went by, several fightings for independence have occurred, yet none was of a long success until Dinh Bo Linh’s troops rising. In 968, Dinh Bo Linh defeated 12 lords of the district (former Vietnam) and proclaimed to be Emperor. He was the first King of Dinh dynasty (King Dinh Tien Hoang), and named the country Dai Co Viet. Then he set up Hoa Lu, his home country, as the capital of Dai Co Viet. His meaningful success was a great landmark of Vietnam as transferring from a district of China into an truly independent nation. 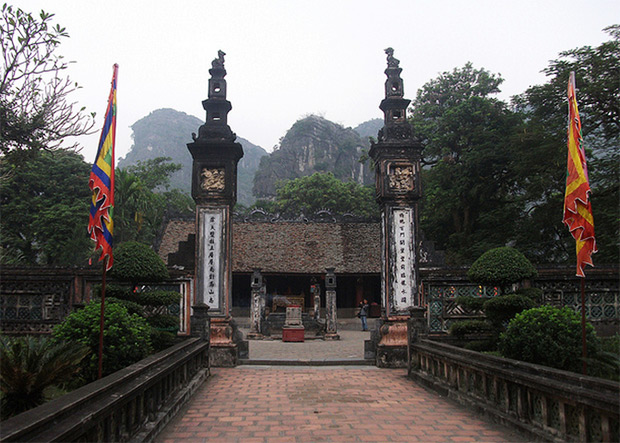 Dinh dynasty lasted 12 years. Then Le Hoan started 29 years of Le dynasty. In 1009, when Ly Cong Uan became the King, he found an area which had an excellent site and topography, therefore decided to move the capital from Hoa Lu to Dai La citadel, former Hanoi. In 1910, Hoa Lu ended its honored role of being the Nation’s Capital after 42 years. Today, tourists elsewhere come to Hoa Lu for the purpose of involving themselves in a historical and mysterious world of an ancient capital with miraculous palace, mighty citadel, hiding in the grandiose mountain ranges and gentle Hoang Long rivers. This makes a magnificient fairy scenery!