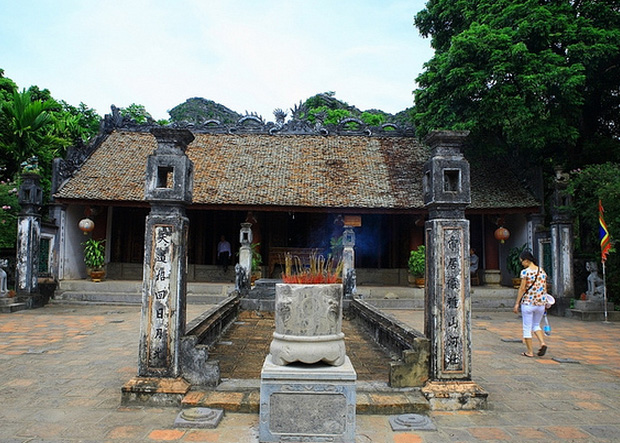 The temple was built in the 17th century, with a special architecture, the interior of which had an “I letter” shape, surrounded by a square land. Now you are standing at the 3-class mid-noon gate. You can go on to the next one, seeing a dragon bed and getting the second gate. Passing through one more gate and walking along the holy way will lead to the main house. In the middle of the house is one more stone dragon-bed, which is 1.8m long and 1.4m wide. Looking at the bed surface you can easily find sculptured dragon, shrimps, fishes, rats images which are of deep delicateness and skill.

This main house has 3 parts. The first one is the worshipping place with 5 rooms. The second is an incense burning room where they worshiped 4 important mandarins under Dinh dynasty. The third main part, the most important one, is separated to the second by a high door. Here you can witness there worshipping King Dinh Tien Hoang and his three sons. 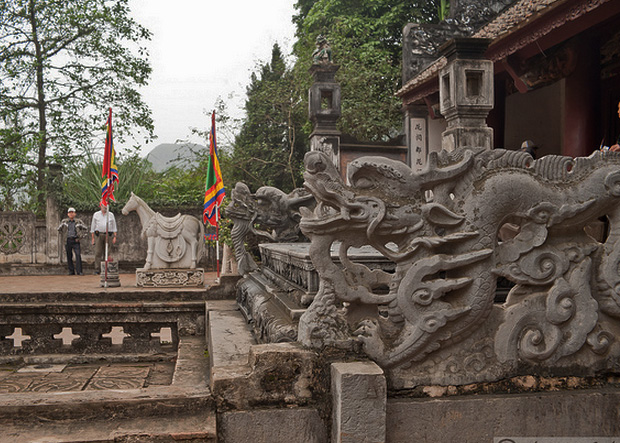 You may have to admit that the temple is an original architectural work of art full of folk sculptures! It attracts tourists for so many valuable relics hidden in thick bricks, tilts, Buddhist prayer-book pillars, and more importantly its meaningful history of the first ancient capital of Vietnam.

Nearby you can find the Tomb of King Dinh Tien Hoang, which was situated on Ma Yen Mount, in front of his Temple. “Ma yen” means “back of a horse”, as seen from a far distance, it has the shape of a back of a horse. The tomb is in the sagging down post of the horse’s back. To reach up to the tomb, visitors must pass 150 rock steps. The tomb was built in 1840, under Ming Mang King reign.